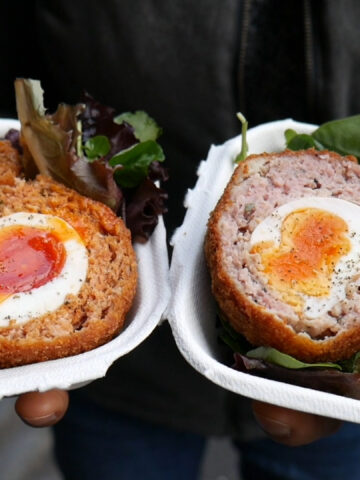 Watch the YouTube video above to see our visit to Borough Market!

Borough Market is one of the oldest food markets in London, dating back to about a century and a half ago. It’s a gigantic market that attracts hordes of visitors for its diverse selection of street food and gourmet goods.

Prioritize your stomach space, because it’s easy to get overwhelmed when you walk through Borough Market’s seemingly endless stalls. We had the privilege of seeing Borough Market for ourselves, and would love to share some tips with you!

Full disclosure: half of this list is a review, and the other half is a wish list for when we return to London. We could only tackle a few dishes, with so much food in so little time! 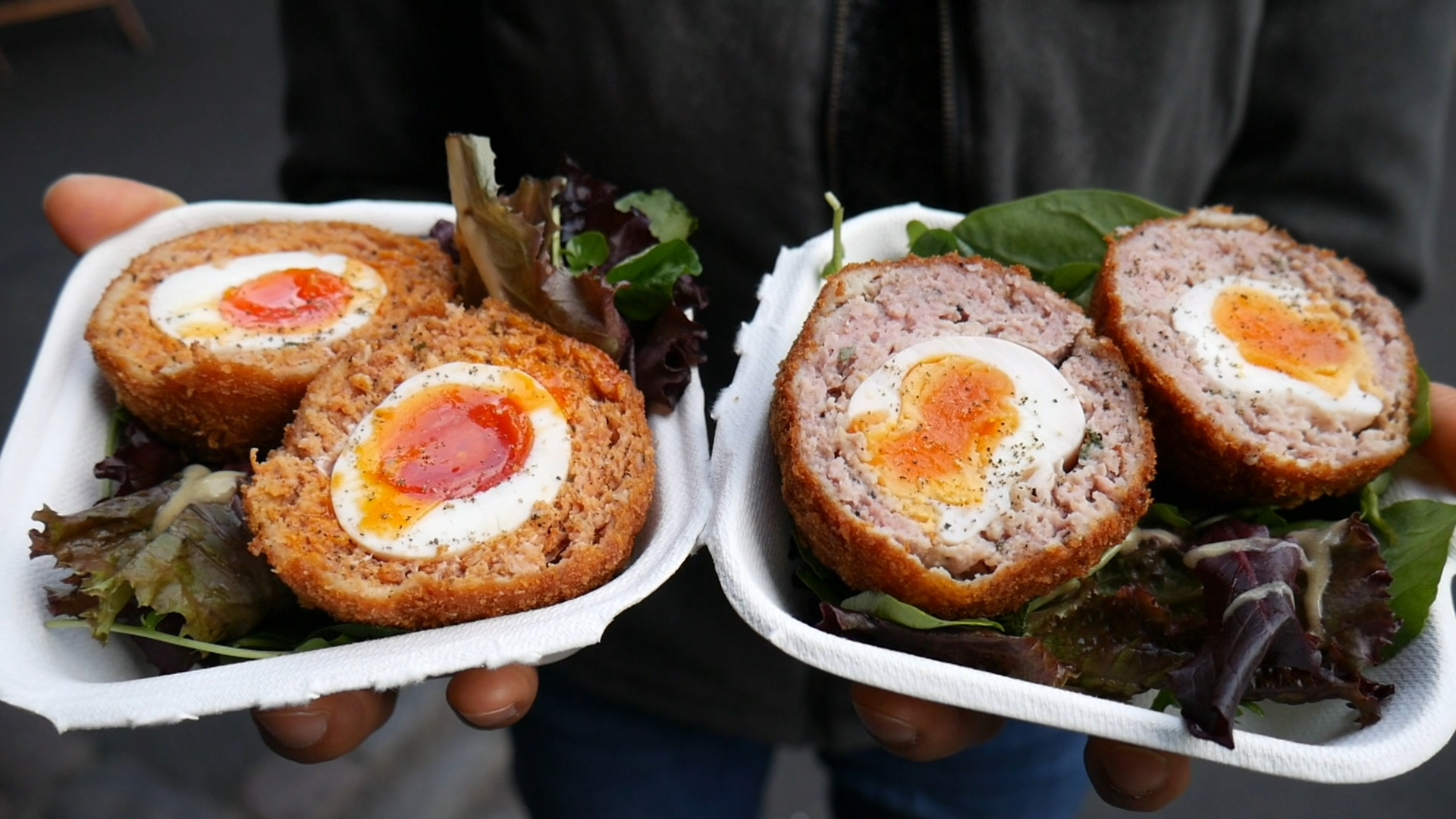 Scotch eggs are deep-fried soft boiled eggs encased in an armor of meat. I’ve seen so much of this popular pub snack in British TV shows, so it was mandatory that we taste the real deal in London.

Scotchtails creates artisan Scotch eggs with extraordinary flavors, from “beetroot and lentil” to “mature cheddar and smoked bacon”. The eggs are smaller and have a deeper colored yolk compared to the ordinary market eggs we get here in California.

When we visited, they only had two flavors available: “traditional pork and sage” and “chorizo”. We couldn’t make a decision, so we got both flavors served atop a bed of spring greens.

We shortly realized that the size of these Scotch eggs are deceiving. Eating one whole Scotch egg was a challenge to finish!

These Scotch eggs were excellent, with a crispy breaded exterior and a burst of flavors from the meat. Although we didn’t have other Scotch eggs to compare it to, Scotchtails is a fantastic place to try your very first Scotch egg! 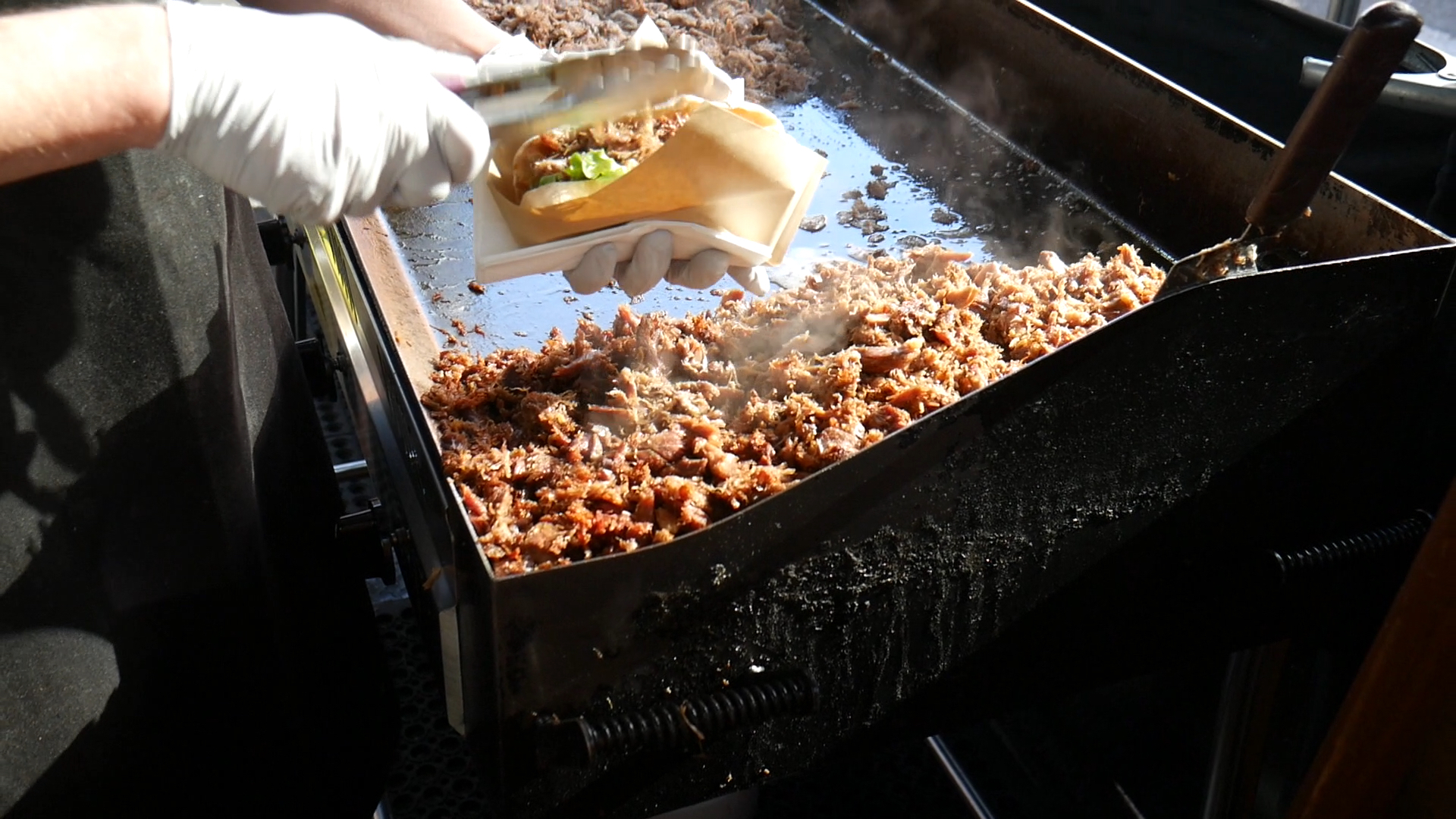 Duck confit is duck cooked in its own fat. If you’re a fan of duck, stop by the Le Marché du Quartier stall for their delectable street food-style duck confit.

This stall fries the duck until it’s transformed into buttery, crispy shreds. I recommend you choose the sandwich, in which the duck confit is stuffed in a buttered ciabatta roll, and layered with sweet chutney and lettuce.

This hunkin’ sandwich gives you both crunchy and chunky pieces of fried duck. Do yourself a favor and grab one of these beauties fresh off the grill! 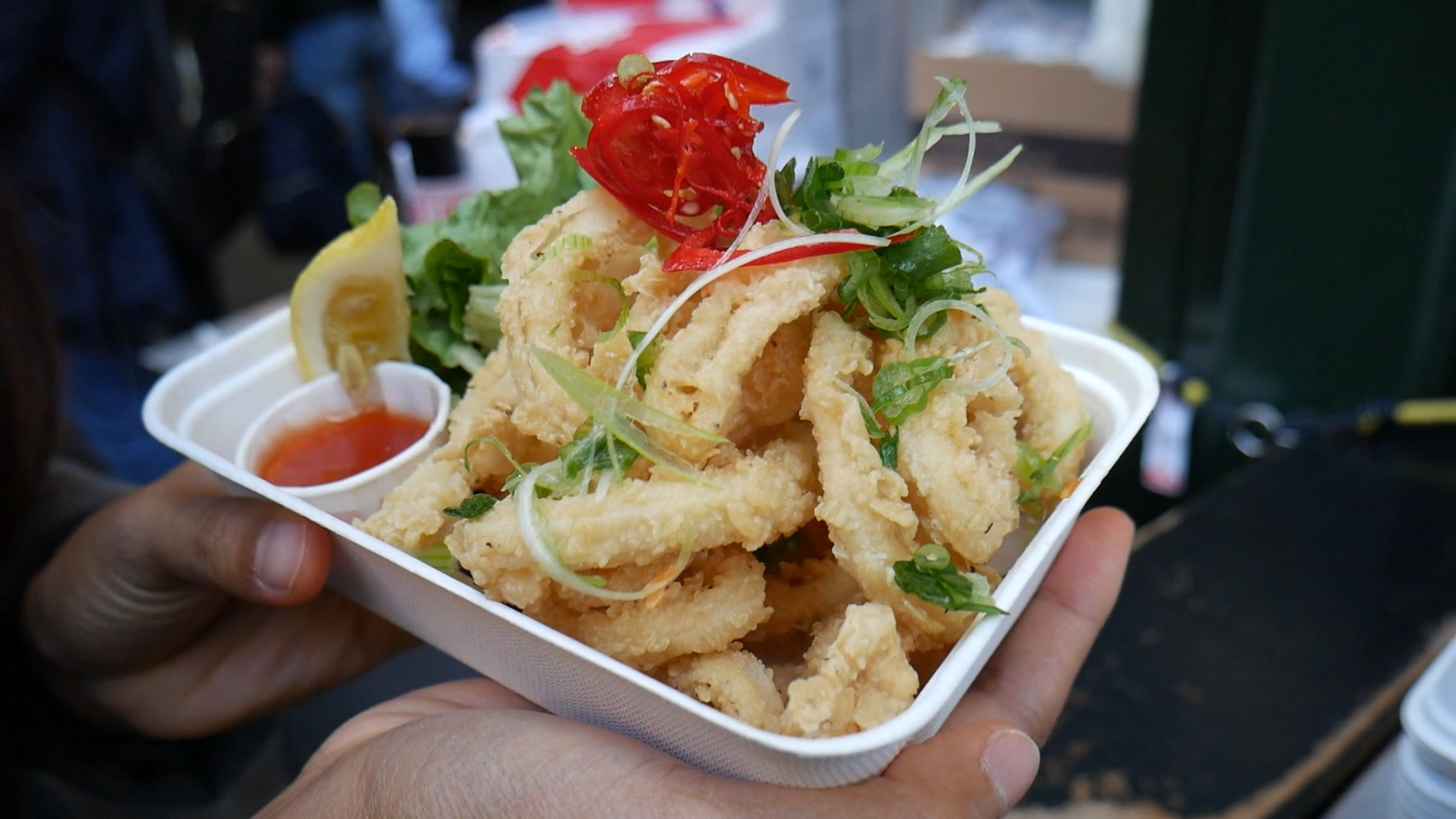 Furness Food Hut will hook you in with their irresistible tasters of curry, paella, and more. It’s boggling how this giant stall managed to make three completely different dishes taste phenomenal.

It’s impossible to miss this stall while walking through Borough Market. Their enormous vats of simmering curries and clams scream for attention.

The chicken curry, paella, and squid were packed with flavor from their splendid blend of spices. Don’t let the calamari squid fool you with its plain looks; the squid was surprisingly tender and flavorful, with perfectly crunchy breading.

The best part is, they offer free samples! Grab at least one of Furness Food Hut’s specialties, and you won’t be disappointed. 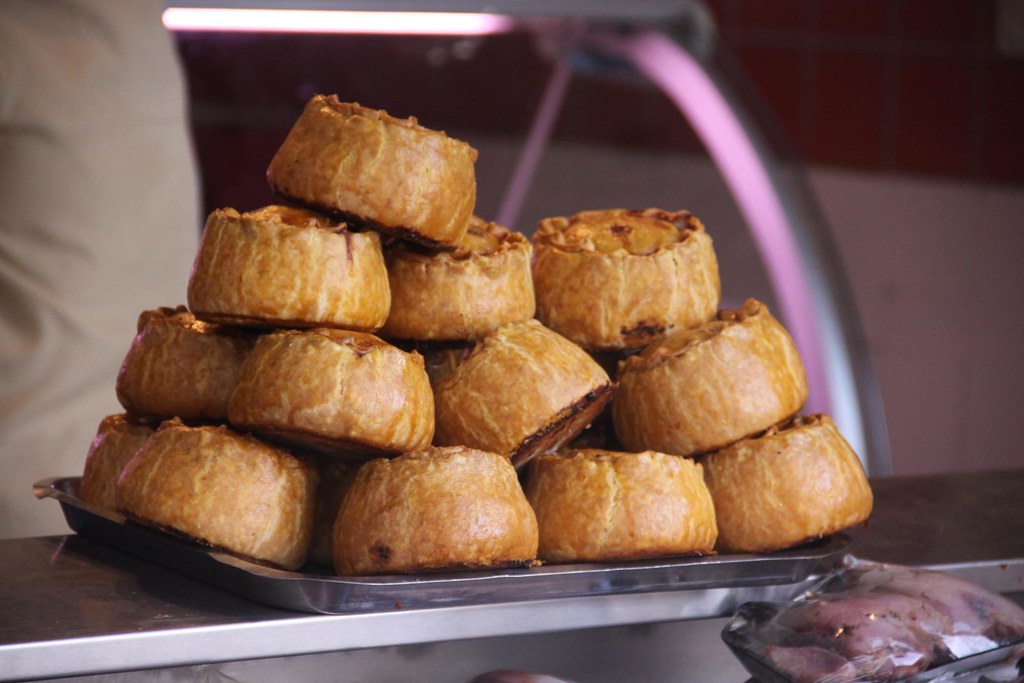 “Who ate all the pies?” by ultraBobban is licensed under CC BY-NC 2.0

These pork pies aren’t as frequently mentioned on other Borough Market lists, but I’d definitely make a stop here when I return to London. I have a weakness for savory pies, and the meat pies we have in California are incomparable to the pies in the United Kingdom.

Mrs. King’s pies started in 1853, and is still standing for more than a century and a half later. Their most popular dish is the pork pie, which earned their rightful spot in this popular market.

Meat pies were one of the most memorable dishes I’ve had during our U.K. trip. If you still haven’t had a proper meat pie, squeeze this one in when you visit the market. 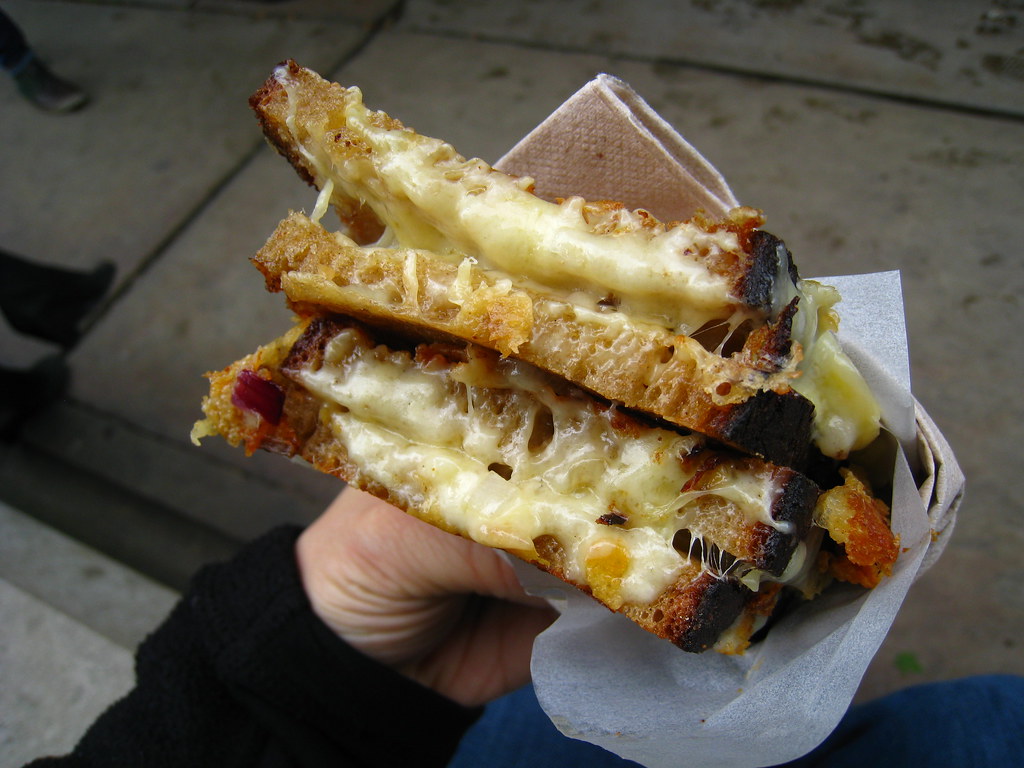 Their sandwich takes the cake among Kappacasein’s customers. This toastie is made with a blend of melted cheeses, onions, and leeks snuggled between two crisp slices of sourdough bread.

Cream-Filled Donuts from Bread Ahead Bakery 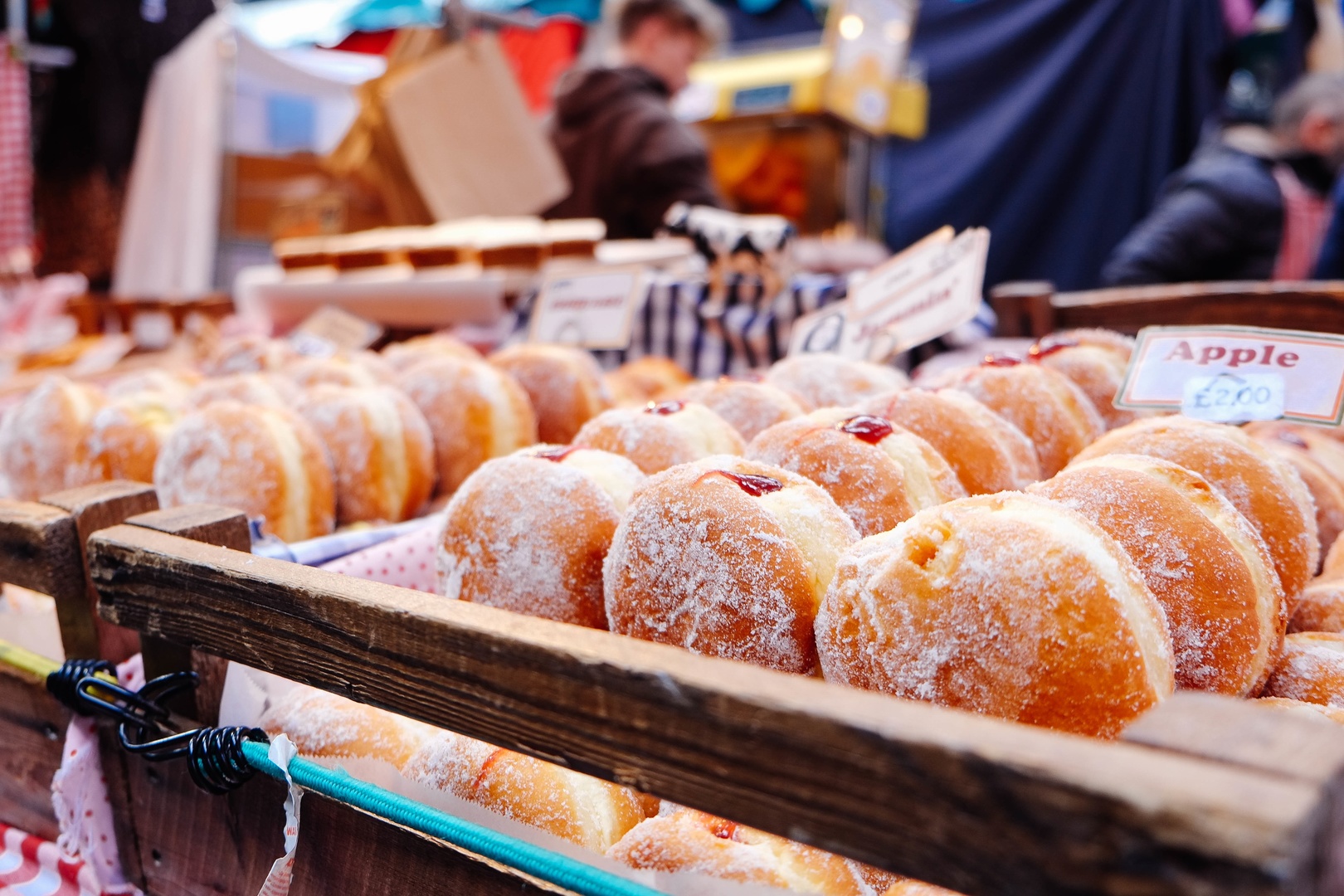 I have a confession to make…as much as I love sweets, I don’t really like donuts. Please don’t hate me!

We figured Bread Ahead was a huge deal when we saw the long queue for their cream-filled donuts. They had unique flavors, like “Créme Caramel and Salted Honeycomb” or “Blueberry and Orange Ripple Custard”.

Even better, Bread Ahead is both a bakery and baking school! You can learn how to make their amazing donuts in one of the classes, if you have extra time during your travels.

Numerous Borough Market visitors declare Bread Ahead donuts as the best donuts they’ve ever had. I’ll make sure to reserve space for at least one donut when I return to London, and judge for myself.

This list is barely scratching the surface of the possibilities that Borough Market has in store. New vendors are constantly being added to the market, so I recommend walking through the whole market to plan out your meals!

Enjoy your gastronomic adventure through London’s grandest food market! Let me know in the comments if you ended up trying any of the items on this list, or any other dishes you’d highly recommend! 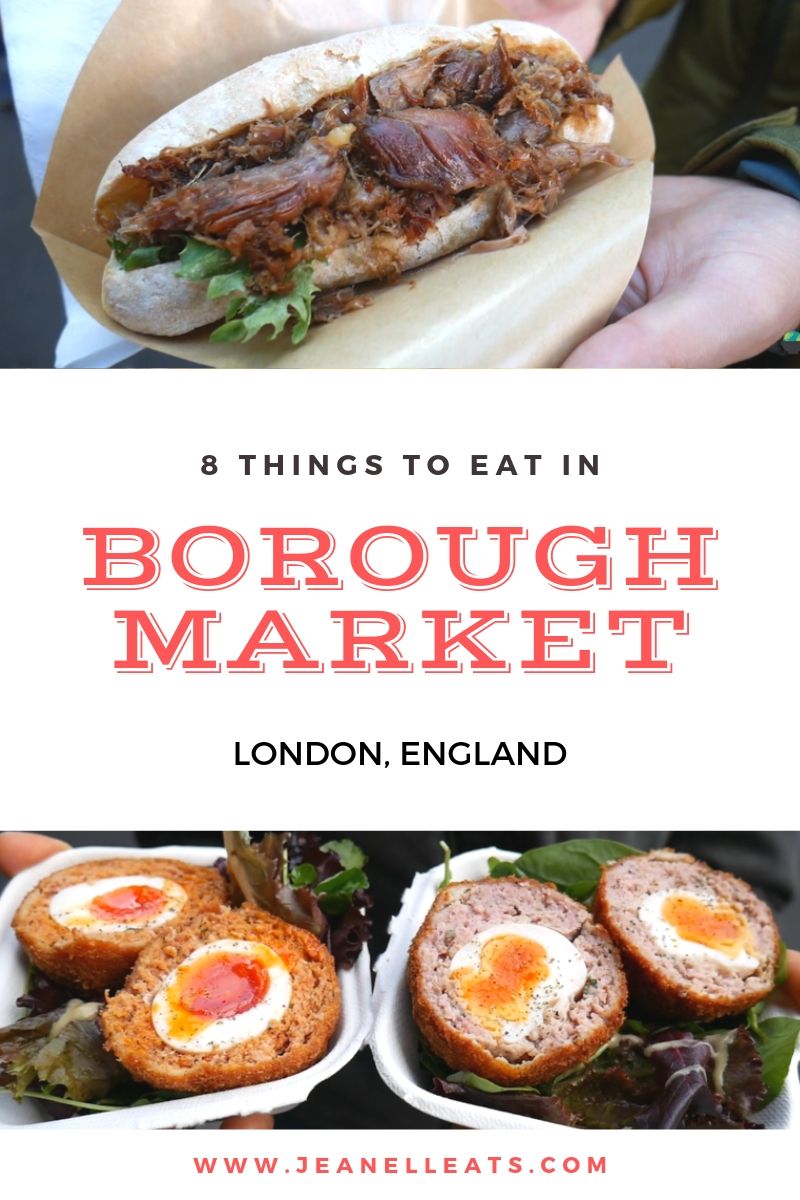 Hi, I’m Jeanelle! I LOVE to share food and stories through my videos.

Join my family and friends as we cook, bake, and taste food from around the world!